After finally inching ahead with the late break on Zhu Lin, she had a chance to serve for the match and was down 15-40, only to win four consecutive points and take the match!

A superb tournament from the Chinese underdog, but it’s the two-time former champ who goes on. ﻿ 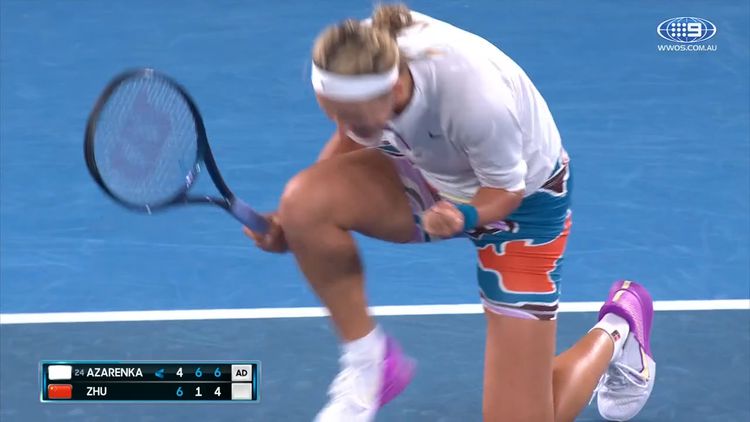 “I feel so relieved – it was two hours, 40 of complete pressure,” she said on court afterwards.

”I’m just so happy – beginning of the year I had a couple of very close matches that didn’t turn my way, so I’m just very happy that I took my chances, I really went for it. I was down 15-40 [in the last game] and was like ‘OK, you have to take it. Nobody’s going to give it to you’.

”I’m just very proud of myself for doing that.”

Azarenka was full of praise for her vanquished opponent.

”She played like she was never giving up, no matter what the score is, playing point-by-point. I don’t know where she comes from but with this tennis, she has to be top 20, because she played amazing.”

”What I mean is there’s so many players who go out here and can produce an amazing level, so it makes it very tough – I didn’t know much about her and I had to adjust on the go.”

”She’s an amazing player, I wish her luck for the rest of the year and I hope we’ll see a lot more of her.”

Azarenka moves on to play Jessica Pegula in the quarter finals.